Variation of both tritium (3H) and beryllium (7Be) concentrations in air, rain and humidity samples collected at Ioannina, North-western Greece 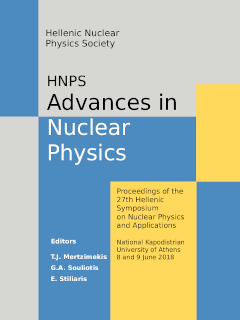 Studies concerning hydrologicalcycle, the movement of water through the atmosphere, surface and underground but also the ocean circulation, often use radioactive isotopes  with short or long half lives to evaluate the time scales of these processes. The study of the temporal and spatial distribution of such radioactive isotopes help to understand the water movement. Usually these isotopes are produced in the upper  atmosphere from the interaction of cosmic rays with nuclei of atmospheric gases. Among these isotopes, tritium (3H) and beryllium (7Be) are very important due to their comparatively short half lives, 12.33 y for 3H and 53.12 d for 7Be. Observed annual fluctuations of the production and consequently the transportation and precipitation of the isotopes on the earth surface, can be attributed to the climate conditions of the troposphere and stratosphere and to the seasonal changes of the boundaries between them.

In the present work results of a study of the variations of 3H and 7Be concentrations in air, liquefied air humidity and precipitation are presented.  Tritium in precipitation and humidity  were measured using liquid scintillation counting, while 7Be in air and rain samples with gamma spectroscopy. An overall trend of decreasing concentrations of 7Be during the winter months is observed showing a reversed behavior during the first spring months. Concentrations of 7Be in rain samples were for the majority of the cases, below the limit of detection. Tritium concentrations in rain similarly to those measured in humidity, tend to increase during the winter months and decrease during spring.

For Readers For Authors For Librarians